The International Review of Music

In my head I can hear Billie Holiday singing “There Is Music Everywhere.” She sang it with such glee as opposed to her better known and more tortured melancholy recordings. And she was right. It’s all around us at any time. 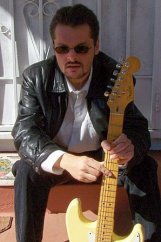 Since I became a music journalist several years ago, I’ve tried to write about it all, or most of what has surrounded me and crossed my path. Writing about rock n’ roll, folk, blues, and all forms of music that fits into the beloved boom era- nostalgia soundtrack seems to be the safest route when writing about music, especially today, so I’ve learned. I’ve written pieces on Bob Dylan, Jimi Hendrix, and Richie Havens and everyone rejoiced.

Whenever “Purple Haze,” “Blowin’ In The Wind,” or “Hey Jude” has been mentioned with “positive vibes” or enthusiasm (a better choice of wording), I got a…

The EGH project on iTunes

This web site is not in the public domain! News found elsewhere about ERAKI Entertainment and it's Artists should be considered rumor unless/until also reported here. Do not use in any way and under any circumstances any material incl. photo, video and audio without prior written permission by Eraki Entertainment You're welcome to link to any page (html) of this site, but may not screen capture pages and posts! More IMPORTANT details available on the Copyright - Terms and conditions page of eraki.com
%d bloggers like this: